Support the YWCA Elgin by eating sub sandwiches at Jersey Mike’s in Carpentersville on November 14th! The YWCA Elgin will receive 25% of the proceeds when we are mentioned. 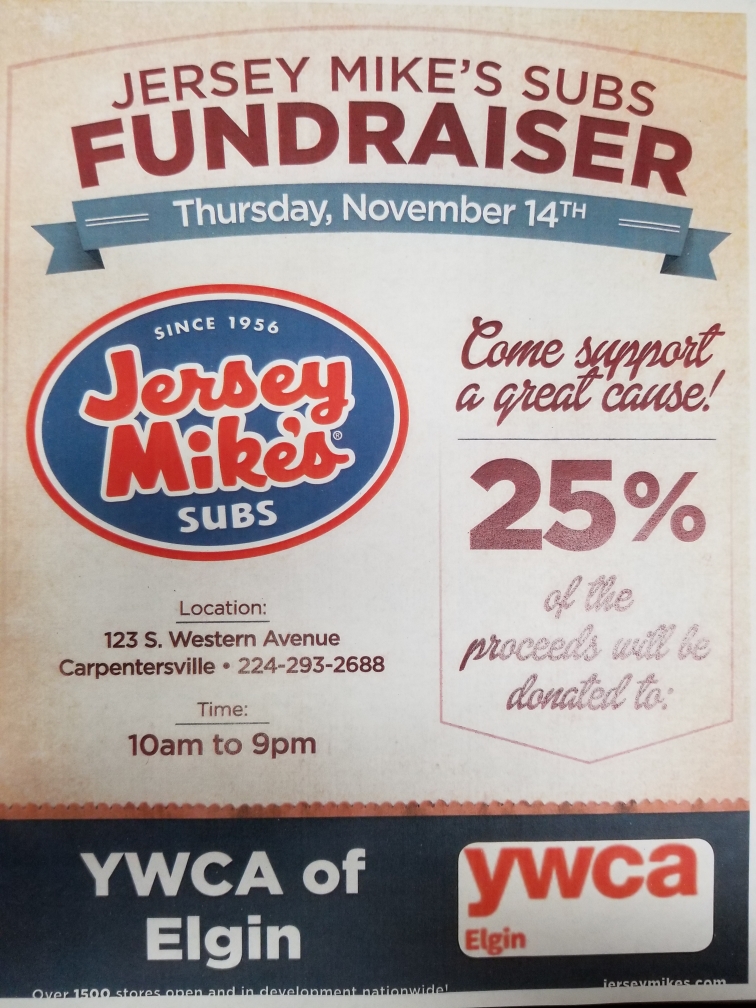 YWCA Elgin’s Statement on the Murder of George Floyd

We are mourning the cold-hearted and cruel killing of George Floyd by a Minneapolis Police Department Officer as three fellow officers watched. Mr. Floyd’s killing reminds us that for far too long African Americans are much more likely to die at the hands of the police. Mr. Floyd is the latest and most vivid example of how black lives continue to be discarded.

Protesters are marching in the streets across the United States, in the greatest numbers since the 1960’s. It sends a strong message we must make changes now and end this cycle. It is imperative to end the institutional racism that infects our society.

The YWCA Elgin stands with Alejandra Castillo, CEO, YWCA USA, who states, “We are outraged by the callous killing of George Floyd by a Minneapolis Police Officer – and similarly appalled by the inaction of three other officers who stood by watching as George Floyd endured unspeakable suffering, but addressing this specific incident alone won’t be enough to prevent future incidents of police violence against Black people, and people of color in America. Our country’s failure to address institutional racism is costing lives. Racism is why coronavirus is killing more people of color than white people. Racism is why police shootings are a leading cause of death for young Black men. Racism is why Black mothers die more frequently in childbirth. Racism has no place in the America we all deserve.”

We call on our national, state, and local leaders to immediately acknowledge the institutional racism in our society and to immediately implement change. The YWCA Elgin, along with the YWCA USA, is committed to racial justice, and we stand united in the fight for all for a fair and just society.

The Board of Directors, YWCA Elgin